Introduction of a contact tracking app for outbreak control

The application of a smartphone application to register physical encounters between individuals is considered by public health authorities, as a means to reduce the number of infections in the 2020 COVID-19 pandemic. The general idea is that continuous registration of all other smartphones in the vicinity of an individual’s smartphone potentially enables early warning of the owners of the other smartphones, in case the individual is tested positive as infected. Those other individuals can then go into isolation and be considered for testing. The purpose of the present simulation is to explore the potential effects of this application on frequencies of infection, isolation, and positive and negative infection test results. 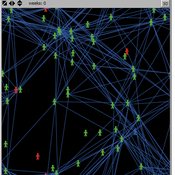 We compare three model estimates for the time and treatment requirements to eliminate HCV among HIV-positive MSM in Victoria, Australia: a compartmental model; an ABM parametrized by surveillance data; and an ABM with a more heterogeneous population.

root disease forestry forest management disease ecology landscape ecology NetLogo
This website uses cookies and Google Analytics to help us track user engagement and improve our site. If you'd like to know more information about what data we collect and why, please see our data privacy policy. If you continue to use this site, you consent to our use of cookies.
Accept