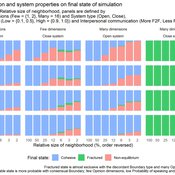 Simulating Components of the Reinforcing Spirals Model and Spiral of Silence

Communication processes occur in complex dynamic systems impacted by person attitudes and beliefs, environmental affordances, interpersonal interactions and other variables that all change over time. Many of the current approaches utilized by Communication researchers are unable to consider the full complexity of communication systems or the over time nature of our data. We apply agent-based modeling to the Reinforcing Spirals Model and the Spiral of Silence to better elucidate the complex and dynamic nature of this process. Our preliminary results illustrate how environmental affordances (i.e. social media), closeness of the system and probability of outspokenness may impact how attitudes change over time. Additional analyses are also proposed.

We model interpersonal dynamics and study behavior in the classroom in the hypothetical case of a single teacher who defines students’ seating arrangements. The model incorporates the mechanisms of peer influence on study behavior, on attitude formation, and homophilous selection in order to depict the interrelated dynamics of networks, behavior, and attitudes. We compare various seating arrangement scenarios and observe how GPA distribution and level of prejudice changes over time. 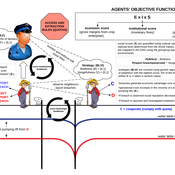 cooperation social norms flowlogo regulatory compliance world values survey cultural theory groundwater management common pool resource
This website uses cookies and Google Analytics to help us track user engagement and improve our site. If you'd like to know more information about what data we collect and why, please see our data privacy policy. If you continue to use this site, you consent to our use of cookies.
Accept