We study cultural dissemination in the context of an Axelrod-like agent-based model describing the spread of cultural traits across a society, with an added element of social influence. This modification produces absorbing states exhibiting greater variation in number and size of distinct cultural regions compared to the original Axelrod model, and we identify the mechanism responsible for this amplification in heterogeneity. We develop several new metrics to quantitatively characterize the heterogeneity and geometric qualities of these absorbing states. Additionally, we examine the dynamical approach to absorbing states in both our Social Influence Model as well as the Axelrod Model, which not only yields interesting insights into the differences in behavior of the two models over time, but also provides a more comprehensive view into the behavior of Axelrod’s original model. The quantitative metrics introduced in this paper have broad potential applicability across a large variety of agent-based cultural dissemination models. 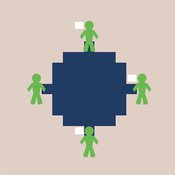 social network local extinction cultural transmission spatial model paleolithic small world cultural evolution evolutionary anthropology spatial network structured populations
This website uses cookies and Google Analytics to help us track user engagement and improve our site. If you'd like to know more information about what data we collect and why, please see our data privacy policy. If you continue to use this site, you consent to our use of cookies.
Accept