The Coevolution of the Firm and the Product Attribute Space

This model inspects the performance of firms as the product attribute space changes, which evolves as a consequence of firms’ actions. Firms may create new product variants by dragging demand from other existing variants. Firms decide whether to open new product variants, to invade existing ones, or to keep their variant portfolio. At each variant there is a Cournot competition each round. Competition is nested since many firms compete at many variants simultaneously, affecting firm composition at each location (variant).

After the Cournot outcomes, at each round firms decide whether to (i) keep their existing product variant niche, (ii) invade an existing variant, (iii) create a new variant, or (iv) abandon a variant. Firms’ profits across their niche take into consideration the niche-width cost and the cost of opening a new variant.

A Balance Model of Opinion Hyperpolarization

Contains python3 code to replicate the opinion dynamics model from our (so far unpublished) JASSS sumbission “A Balance Model of Opinion Hyperpolarization”. The main function is run_model(), which returns a dictionary object containing various outcome metrics.

The basic premise of the model is to simulate several ‘agents’ going through build-buy cycles: Build: Factories follow simple rules of strategy in the allocation of resources between making exploration and exploitation type products. Buy: Each of two types of Consumers, early-adopters and late adopters, follow simple purchase decision rules in deciding to purchase a product from one of two randomly chosen factories. Thus, the two working ‘agents’ of the model are ‘factories’ and […] 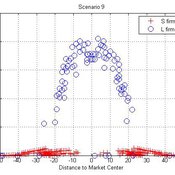 Micro-level Adaptation, Macro-level Selection, and the Dynamics of Market Partitioning

This model simulates the emergence of a dual market structure from firm-level interaction. Firms are profit-seeking, and demand is represented by a unimodal distribution of consumers along a set of taste positions.

organizational ecology industry dynamics sunk costs dual market structures
This website uses cookies and Google Analytics to help us track user engagement and improve our site. If you'd like to know more information about what data we collect and why, please see our data privacy policy. If you continue to use this site, you consent to our use of cookies.
Accept