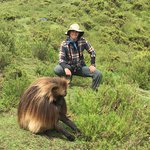 I am a Postdoctoral Associate in the Ecology, Evolution and Behavior department at the University of Minnesota. My research involves using agent-based models combined with lab and field research to test a broad range of hypotheses in biology. I am currently developing an agent-based model of animal cell systems to investigate the epigenetic mechanisms that influence cell behavior. For my PhD work, I created a model, B3GET, which simulates the evolution of virtual primates to better understand the relationships between growth and development, life history and reproductive strategies, mating strategies, foraging strategies, and how ecological factors drive these relationships. I have also conducted fieldwork to inform the modeled behavior of these virtual organisms. Here I am pictured with an adult male gelada in Ethiopia!

I specialize in creating agent-based models of biological systems for research and education in genetics, evolution, demography, ecology, and behavior.

This model replicates the Axelrod prisoner’s dilemma tournaments. The model takes as input a file of strategies and pits them against each other to see who achieves the best payoff in the end. Change the payoff structure to see how it changes the tournament outcome! 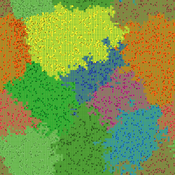