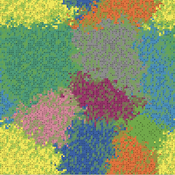 Lethal Geometry examines the relationship between territory size and intergroup mortality risk under realistic assumptions. Furthermore, the model investigates how fertility is affected by this relationship. Territory sizes are expected to fluctuate over time in response to individual reproduction, random-walking, and lethal intergroup encounters. In turn, the individuals within these territories are expected to vary in their mortality and fertility rates.