The model of market of one commodity , in which there are in each moment of time the same quantity and the same quantity of money was formulated and researched in this text. We also study this system as a game of automata. 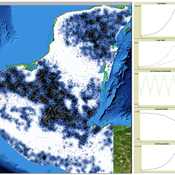 ecosystem services socio-ecological systems maya archaeology
This website uses cookies and Google Analytics to help us track user engagement and improve our site. If you'd like to know more information about what data we collect and why, please see our data privacy policy. If you continue to use this site, you consent to our use of cookies.
Accept