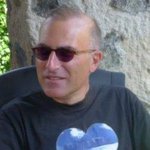 I live in Salento (South Italy) the tiny land between two seas, where I work as a teacher in a school for adults.
My education includes a degree in Life Sciences; in my post-graduate training, I have been involved in searching for the genetic and molecular responses of cells to environmental and genomic stresses. Now, I am mainly interested in approaching theoretical biology and complex adaptive systems through agent-based modelling.