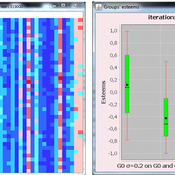 The first simple movement models used unbiased and uncorrelated random walks (RW). In such models of movement, the direction of the movement is totally independent of the previous movement direction. In other words, at each time step the direction, in which an individual is moving is completely random. This process is referred to as a Brownian motion.
On the other hand, in correlated random walks (CRW) the choice of the movement directions depends on the direction of the previous movement. At each time step, the movement direction has a tendency to point in the same direction as the previous one. This movement model fits well observational movement data for many animal species.
The presented agent based model simulated the movement of the agents as a correlated random walk (CRW). The turning angle at each time step follows the Von Mises distribution with a ϰ of 10. The closer ϰ gets to zero, the closer the Von Mises distribution becomes uniform. The larger ϰ gets, the more the Von Mises distribution approaches a normal distribution concentrated around the mean (0°).
This model is implemented in python and can be used as a building block for more complex agent based models that would rely on describing the movement of individuals with CRW. 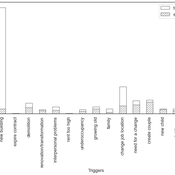 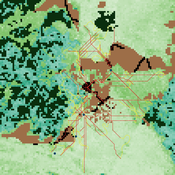 RaMDry allows to study the dynamic use of forage ressources by herbivores in semi-arid savanna with an emphasis on effects of change of climate and management. Seasonal dynamics affects the amount and the nutritional values of the available forage.

This model analyzes two investors forming their expectations with heterogeneous strategies in order to optimize their portfolios by means of a Sharpe ratio maximization. Traders are distinguished according to their methodology used in forecasting. Two acknowledged algorithms of technical analysis have been implemented to compare portfolios performances and assess profitability of each technique.

The Rigor and Transparency Reporting Standard (RAT-RS) is a tool to improve the documentation of data use in Agent-Based Modelling. Following the development of reporting standards for models themselves, attention to empirical models has now reached a stage where these standards need to take equally effective account of data use (which until now has tended to be an afterthought to model description). It is particularly important that a standard should allow the reporting of the different uses to which data may be put (specification, calibration and validation), but also that it should be compatible with the integration of different kinds of data (for example statistical, qualitative, ethnographic and experimental) sometimes known as mixed methods research.

Here we provide supplementary material for this article, consisting of a RAT-RS user guide and RAT-RS templates.

Interdisciplinarity Reporting standards reproducibility Agent-based modelling Data
This website uses cookies and Google Analytics to help us track user engagement and improve our site. If you'd like to know more information about what data we collect and why, please see our data privacy policy. If you continue to use this site, you consent to our use of cookies.
Accept