We represent commuters and their preferences for transportation cost, time and safety. Agents assess their options via their preferences, their environment, and the modes available. The model has policy levers to test impact on last-mile problem.

Vulnerability of Cooperation Due to Limited Vision

This model describes the consequences of limited vision of agents in harvesting a common resource. We show the vulnerability of cooperation due to reduced visibility of the resource and other agents. 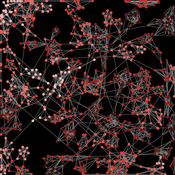 We provide a full description of the model following the ODD protocol (Grimm et al. 2010) in the attached document. The model is developed in NetLogo 5.0 (Wilenski 1999).

agent-based modelling household consumption carbon footprint environmental policies
This website uses cookies and Google Analytics to help us track user engagement and improve our site. If you'd like to know more information about what data we collect and why, please see our data privacy policy. If you continue to use this site, you consent to our use of cookies.
Accept