We study three obstacles of the expansion of contract rice farming in the Mekong Delta (MKD) region. The failure of buyers in building trust-based relationship with small-holder farmers, unattractive offered prices from the contract farming scheme, and limited rice processing capacity have constrained contractors from participating in the large-scale paddy field program. We present an agent-based model to examine the viability of contract farming in the region from the contractor perspective.

The model focuses on financial incentives and trust, which affect the decision of relevant parties on whether to participate and honor a contract. The model is also designed in the context of the MKD’s rice supply chain with two contractors engaging in the contract rice farming scheme alongside an open market, in which both parties can renege on the agreement. We then evaluate the contractors’ performances with different combinations of scenarios related to the three obstacles.

Our results firstly show that a fully-equipped contractor who opportunistically exploits a relatively small proportion (less than 10%) of the contracted farmers in most instances can outperform spot market-based contractors in terms of average profit achieved for each crop. Secondly, a committed contractor who offers lower purchasing prices than the most typical rate can obtain better earnings per ton of rice as well as higher profit per crop. However, those contractors in both cases could not enlarge their contract farming scheme, since either farmers’ trust toward them decreases gradually or their offers are unable to compete with the benefits from a competitor or the spot market. Thirdly, the results are also in agreement with the existing literature that the contract farming scheme is not a cost-effective method for buyers with limited rice processing capacity, which is a common situation among the contractors in the MKD region.

A Model of Global Diversity and Local Consensus in Status Beliefs 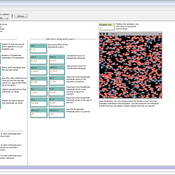 This model explores a social mechanism that links the reversal of the gender gap in education with changing patterns in relative divorce risks in 12 European countries.

divorce repartnering marriage market sex ratio gender assortative mating agent-based computational modelling education
This website uses cookies and Google Analytics to help us track user engagement and improve our site. If you'd like to know more information about what data we collect and why, please see our data privacy policy. If you continue to use this site, you consent to our use of cookies.
Accept