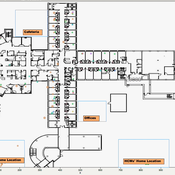 Knowledge Sharing in a Hospital

Organizations are complex systems comprised of many dynamic and evolving interaction patterns among individuals and groups. Understanding these interactions and how patterns, such as informal structures and knowledge sharing behavior, emerge are crucial to creating effective and efficient organizations. To explore such organizational dynamics, the agent-based model integrates a cognitive model, dynamic social networks, and a physical environment.

The model explores food distribution patterns that emerge in artificial small-scale human groups when agents follow a set of spatially explicit sharing interaction rules derived from a theory on the evolution of the egalitarian social instinct. 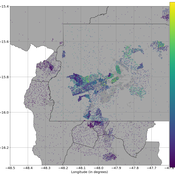 In the “World of Cows”, dairy farmers run their farms and interact with each other, the surrounding agricultural landscape, and the economic and political framework. The model serves as an exemplary case of an interdependent human-environment system.

With the model, users can analyze the influence of policies and markets on land use decisions of dairy farms. The land use decisions taken by farms determine the delivered ecosystem services on the landscape level. Users can choose a combination of five policy options and how strongly market prices fluctuate. Ideally, the choice of policy options fulfills the following three “political goals” 1) dairy farming stays economically viable, 2) the provision of ecosystem services is secured, and 3) government spending on subsidies is as low as possible.

The model has been designed for students to practice agent-based modeling and analyze the impacts of land use policies.

This NetLogo model is an implementation of the mostly verbal (and graphic) model in Jarret Walker’s Human Transit: How Clearer Thinking about Public Transit Can Enrich Our Communities and Our Lives (2011). Walker’s discussion is in the chapter “Connections or Complexity?”. See especially figure 12-2, which is on page 151.

In “Connections or Complexity?”, Walker frames the matter as involving a choice between two conflicting goals. The first goal is to minimize connections, the need to make transfers, in a transit system. People naturally prefer direct routes. The second goal is to minimize complexity. Why? Well, read the chapter, but as a general proposition we want to avoid unnecessary complexity with its attendant operating characteristics (confusing route plans in the case of transit) and management and maintenance challenges. With complexity general comes degraded robustness and resilience.

How do we, how can we, choose between these conflicting goals? The grand suggestion here is that we only choose indirectly, implicitly. In the present example of connections versus complexity we model various alternatives and compare them on measures of performance (MoP) other than complexity or connections per se. The suggestion is that connections and complexity are indicators of, heuristics for, other MoPs that are more fundamental, such as cost, robustness, energy use, etc., and it is these that we at bottom care most about. (Alternatively, and not inconsistently, we can view connections and complexity as two of many MoPs, with the larger issue to be resolve in light of many MoPs, including but not limited to complexity and connections.) We employ modeling to get a handle on these MoPs. Typically, there will be several, taking us thus to a multiple criteria decision making (MCDM) situation. That’s the big picture. 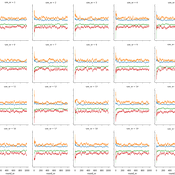 This project is based on a Jupyter Notebook that describes the stepwise implementation of the EWA model in bi-matrix ( 2×2 ) strategic-form games for the simulation of economic learning processes. The output is a dataset with the simulated values of Attractions, Experience, selected strategies, and payoffs gained for the desired number of rounds and periods. The notebook also includes exploratory data analysis over the simulated output based on equilibrium, strategy frequencies, and payoffs. 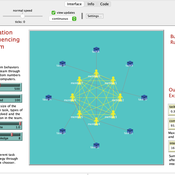 This model system aims to simulate the whole process of task allocation, task execution and evaluation in the team system through a feasible method. On the basis of Complex Adaptive Systems (CAS) theory and Agent-based Modelling (ABM) technologies and tools, this simulation system attempts to abstract real-world teams into MAS models. The author designs various task allocation strategies according to different perspectives, and the interaction among members is concerned during the task-performing process. Additionally, knowledge can be acquired by such an interaction process if members encounter tasks they cannot handle directly. An artificial computational team is constructed through ABM in this simulation system, to replace real teams and carry out computational experiments. In all, this model system has great potential for studying team dynamics, and model explorers are encouraged to expand on this to develop richer models for research.

SIM-VOLATILE: Adoption of emerging circular technologies in the waste-treatment sector

The SIM-VOLATILE model is a technology adoption model at the population level. The technology, in this model, is called Volatile Fatty Acid Platform (VFAP) and it is in the frame of the circular economy. The technology is considered an emerging technology and it is in the optimization phase. Through the adoption of VFAP, waste-treatment plants will be able to convert organic waste into high-end products rather than focusing on the production of biogas. Moreover, there are three adoption/investment scenarios as the technology enables the production of polyhydroxyalkanoates (PHA), single-cell oils (SCO), and polyunsaturated fatty acids (PUFA). However, due to differences in the processing related to the products, waste-treatment plants need to choose one adoption scenario.

In this simulation, there are several parameters and variables. Agents are heterogeneous waste-treatment plants that face the problem of circular economy technology adoption. Since the technology is emerging, the adoption decision is associated with high risks. In this regard, first, agents evaluate the economic feasibility of the emerging technology for each product (investment scenarios). Second, they will check on the trend of adoption in their social environment (i.e. local pressure for each scenario). Third, they combine these two economic and social assessments with an environmental assessment which is their environmental decision-value (i.e. their status on green technology). This combination gives the agent an overall adaptability fitness value (detailed for each scenario). If this value is above a certain threshold, agents may decide to adopt the emerging technology, which is ultimately depending on their predominant adoption probabilities and market gaps. 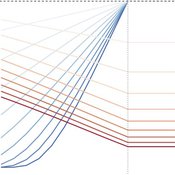 Schelling Model of the City of Salzburg

The purpose of the model is to better understand, how different factors for human residential choices affect the city’s segregation pattern. Therefore, a Schelling (1971) model was extended to include ethnicity, income, and affordability and applied to the city of Salzburg. So far, only a few studies have tried to explore the effect of multiple factors on the residential pattern (Sahasranaman & Jensen, 2016, 2018; Yin, 2009). Thereby, models using multiple factors can produce more realistic results (Benenson et al., 2002). This model and the corresponding thesis aim to fill that gap.

University of Salzburg Schelling GAMA
This website uses cookies and Google Analytics to help us track user engagement and improve our site. If you'd like to know more information about what data we collect and why, please see our data privacy policy. If you continue to use this site, you consent to our use of cookies.
Accept