CharRec simulates the formation of long-term sedimentary charcoal records based on empirically supported models of charcoal dispersion and deposition, physical landscape parameters, and user-defined ignition scenarios. The model provides an exploratory tool to examine the relationship between natural (i.e., lightning caused) and anthropogenic ignition patterns, frequencies, and intensities of landscape fires, and characteristics of the charcoal record produced under different combinations of these parameters. Simulated charcoal records are statistically compared to empirical case studies to determine which ignition scenarios most likely contributed to the formation of a sedimentary record over time. CharRec simulates a suite of processes that impact the generation of the charcoal record, including characteristics of the biophysical landscape such as terrain and wind; fire ignition and charcoal production; and the aerial dispersal of charcoal and its deposition within an accumulating body of sediment. 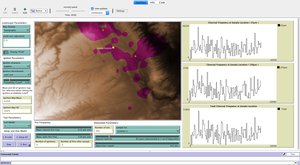 Version 1.5.0: Allows for R dispersion script to be selected by user

This model has not been reviewed by CoMSES Net and should be independently reviewed to meet the Open Code Badge guidelines.
You can use the following HTML or Markdown code to create an Open Code Badge that links to version 1.5.0 of this computational model.
Download Version 1.5.0
Authors