Dr. William G. Kennedy, “Bill,” is continuing to learn in a third career, this time as an academic, a computational social scientist.

His first a career was in military service as a Naval Officer, starting with the Naval Academy, Naval PostGraduate School (as the first computer science student from the Naval Academy), and serving during the Cold War as part of the successful submarine-based nuclear deterrent. After six years of active duty service, he served over two decades in the Naval Reserves commanding three submarine and submarine-related reserve units and retiring after 30 years as a Navy Captain with several personal honors and awards.

His second career was in civilian public service: 10 years at the Nuclear Regulatory Commission and 15 years with the Department of Energy. At the NRC he rose to be an advisor to the Executive Director for Operations and the authority on issues concerning the reliance on human operators for reactor safety, participating in two fly-away accident response teams. He left the NRC for a promotion and to lead, as technical director, the entrepreneurial effort to explore the use of light-water and accelerator technologies for the production of nuclear weapons materials. That work led to him becoming the senior policy officer responsible for strategic planning and Departmental performance commitments, leading development of the first several DOE strategic plans and formal performance agreements between the Secretary of Energy and the President.

Upon completion of doctoral research in Artificial Intelligence outside of his DOE work, he began his third career as a scientist. That started with a fully funded, three-year post-doctoral research position in cognitive robotics at the Naval Research Laboratory sponsored by the National Academy of Science and expanding his AI background with research in experimental Cognitive Science. Upon completion, he joined the Center for Social Complexity, part of the Krasnow Institute for Advanced Study at George Mason University in 2008 where he is now the Senior Scientific Advisor. His research interests range from cognition at the individual level to models of millions of agents representing individual people. He is currently leading a multi-year project to characterize the reaction of the population of a mega-city to a nuclear WMD (weapon of mass destruction) event.

Dr. Kennedy holds a B.S. in mathematics from the U.S. Naval Academy, and Master of Science in Computer Science from the Naval PostGraduate School, and a Ph.D. in Information Technology from George Mason University and has a current security clearance. Dr. Kennedy is a member of Sigma Xi, the American Association for the Advancement of Science (AAAS), the Association for Computing Machinery (ACM), and a life member of Institute of Electrical and Electronics Engineers. He is a STEM volunteer with the Senior Scientists and Engineers/AAAS Volunteer Program for K-12 science, technology, engineering, and mathematics education in the DC-area schools. 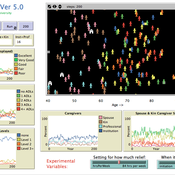 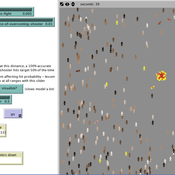 A NetLogo ABM developed to explore unarmed resistance to an active shooter. The landscape is a generalized open outdoor area. Parameters enable the user to set shooter armament and control for assumptions with regard to shooter accuracy.