A Macroeconomic Model of a Closed Economy (version 1.1.0)

It is possible for the program/simulation to produce an undesired result in which a population starves and a simulation is exited early. 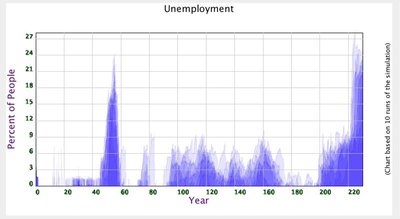 A Macroeconomic Model of a Closed Economy 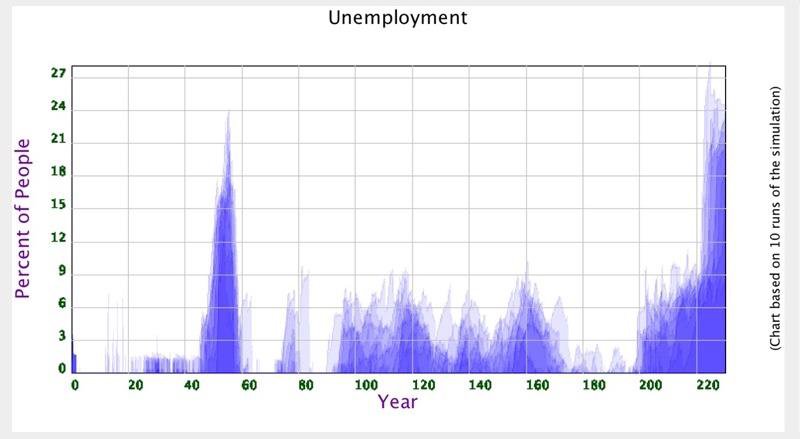 This version adds a graphical user interface (GUI) to the program that runs the model. The GUI allows the user to adjust some parameters and also allows the program to be reset after simulation runs so that other simulations can be run. Allowing some adjustable parameters can give the user a broader idea of potential uses/implications of the three industry model.

An apache ant build file has been included for compiling the program.

Number Of Simulations To Run:
Users can select to Run 1, 5, 10, 15, 20, or 25 simulations. Expect 10 simulations to take 1-4 minutes. When multiple simulations are run the results are graphed overlapping which can give a good visual of rough statistical tendencies of the simulations.

Adjusting the duration of the simulation:
Selecting a lower duration for simulation runs than the default 230 years will result in graphs with a more “zoomed in” detail. The results section is not displayed for simulations less that 230 years.
Selecting a longer duration will give an idea of the equilibrium that is reached when production rates stop increasing and the population stabilizes. I do not claim that the abrupt stop of the productivity rate increase after 230 years is realistic.

The model itself does not have references but the documentation article does.

This model has been reviewed by CoMSES Net and meets the Open Code Badge guidelines.
You can use the following HTML or Markdown code to create an Open Code Badge that links to version 1.1.0 of this computational model.
Download Version 1.1.0
Contributors