A Macroeconomic Model of a Closed Economy (version 1.0.0)

It is possible for the program/simulation to produce an undesired result in which a population starves and a simulation is exited early. 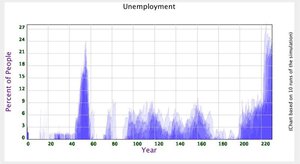 This will be the first release of this model. As is the model and program have not been sufficiently developed to be robust and adaptable enough for a wide variety of applications (perhaps some future iteration of development will be). The program does not accept any input parameters and the program does not write output to files (results are displayed on graphs in a window).

An apache ant build file has been included for compiling the program.

This model has been reviewed by CoMSES Net and meets the Open Code Badge guidelines.
You can use the following HTML or Markdown code to create an Open Code Badge that links to version 1.0.0 of this computational model.
Download Version 1.0.0
Authors