The Thin Blue Line Between Protesters and Their Counter-Protesters (version 1.0.0) 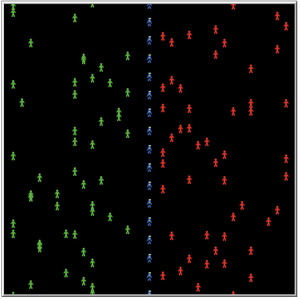 Two opposing protest groups. Each protester has an ‘aversion’ rating that varies normally. They all want to make it to the other side, but some are more adverse to police than others. Police have the same keeness. They will be collect towards protesters.