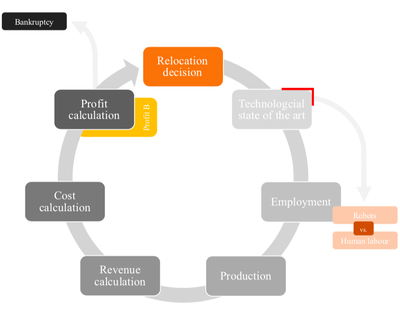 AUTOMATION-INDUCED RESHORING: An Agent-based Model of the German Manufacturing Industry 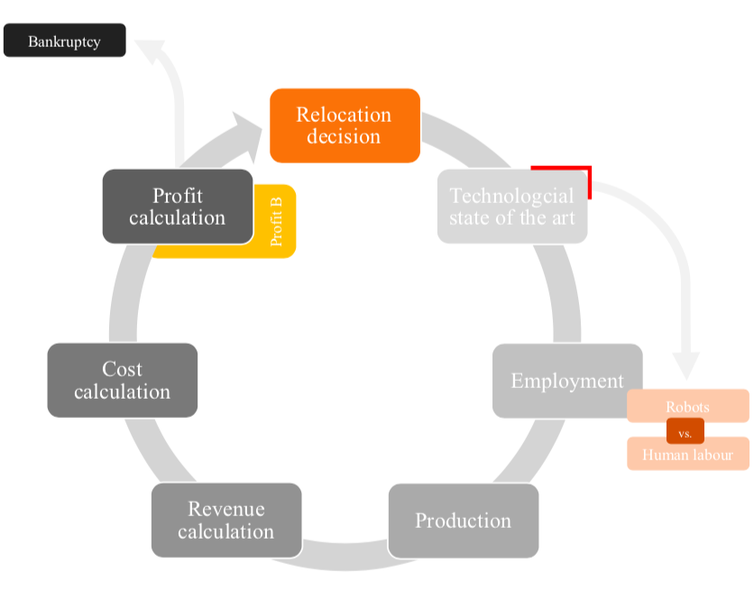 When opening the model, it is set in its initial state, using parameter values which endeavour to replicate the current system. Most of the parameter’s can be altered on the model’s interface and accept any input. The ones which are in opposition to or complementary to another only allow to change one of them, whereas the other one changes accordingly. The model runs successfully for the 100 ticks that the default settings suggest. When a larger number of ticks are specified though, an error appears as values in the model reach numbers NetLogo cannot deal with in the equation revenue output * sales-price-per-product. This addmittedly makes the model rather volatile and further revisions should consider adding guards in order to handle this shortcoming of running the model with larger parameters.

The expected output I was aiming for during simulation runs was the search for basins of attraction or sort of equilibria in which the firms would relocate to the production location most benefitial to them.

The installed monitors allow for a quick overview when running simulations. The colourful paints of the firms in the visualisation screen, representing the German manufacturing industry as a whole, simply indicate their heterogeneity and diversity.

This model has been reviewed by CoMSES Net and meets the Open Code Badge guidelines.
You can use the following HTML or Markdown code to create an Open Code Badge that links to version 1.0.0 of this computational model.
Contributors