In 1922 A.J. Lotka proposed that there was a fundamental phenomenon operating in both ecological and economic systems that caused them to evolve to capture and use energy at the highest rates possible. He identified natural selection as the general causative process. In 1955 H.T. Odum and R.C. Pinkerton expanded on that idea and proposed the existence of a principle that could explain the dynamics of open systems of many kinds. Odum subsequently called it the Maximum Power Principle (MPP), and advocated that it be considered the fourth law of thermodynamics. The MPP would seem to be the source of rising complexity in modern economies.

But some serious questions need to be addressed. Why, in this era of sophisticated science, does the Neo-Classical school of economic theory (NCE) succeed in passing off “perpetual growth” as a solution to the world’s problems when the Earth’s sources and sinks are all overwhelmed by our economic activity? Why is NCE impervious to inroads by science? How can it maintain credibility in modern universities when it is in direct conflict with well-known and much studied scientific concepts such as conservation of mass and energy, carrying capacity, biodiversity, and population collapse?

TpLab is a laboratory in which we can examine the ability of evolution to shape the belief systems and collected tribal wisdom of a simple biophysical society. I am calling this phenomenon “Teleological Pruning” (TP), and I consider it an effect that leads directly from the MPP, as enunciated by Lotka in 1922, and explains the persistence of NCE theory.

This is one of a series of models exploring the dynamics of sustainable economics – PSoup, ModEco, EiLab, OamLab, MppLab, TpLab, CmLab. I believe that ABMs offer an excellent class of systems in which the MPP can be studied. 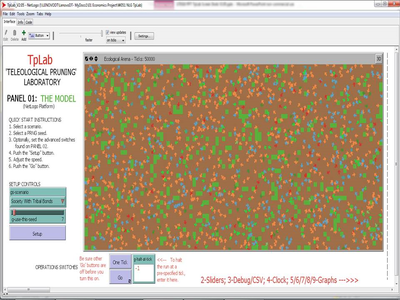 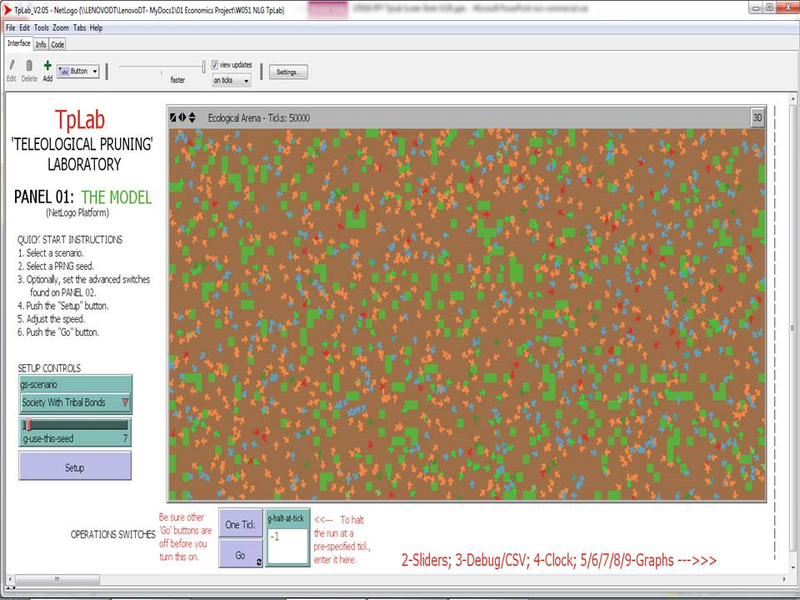 This is the first version of TpLab to be published in OpenABM.