It is extremely difficult to build an intergenerational model of an economy which adheres to the laws of physics (e.g. conservation of mass and energy) and also the laws of finance (e.g. conservation of money). Such a model economy is a hybrid, having both a biophysical base system, and a financial system as an attached cap. In ModEco, at the biophysical level, agents are born, live, work, eat and reproduce from generation to generation. But, at the financial level, every transfer of goods and services (mass and energy) is reciprocated with a transfer of cash. To my knowledge ModEco is the only economic model that attempts such a hybrid model with intergenerational continuity. But, there is a paradox, it seems, on which all such models founder – the diamond-water paradox, perhaps, or the Jevons paradox, or the problem of the price/value gap.

01a ModEco C++ is the older, wiser, more sophisticated sister of this model. It has more optional features, and lots of associated documentation. However, with all of that sophistication, I was only able to produce a single type of sustainable economy which I called the PMM. PMM stands for Perpetual Motion Machine. 01b ModEco NLG is a re-implementation of that model, but using the NetLogo platform, and focusing on that single scenario – the PMM. The PMM achieves sustainability by balancing on the knife edge of an unstable point of equilibrium. In the PMM, a central government redistributes wealth, manages waste, and manages the estates of dead agents. Prices are strictly controlled. Most agents can expect a life of poverty and starvation. This would seem to be the nature of a sustainable economy. The challenge is to find out why. 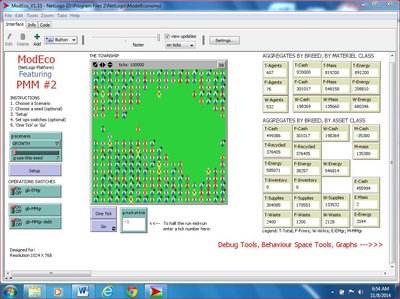 This is a re-implementation of model “01a ModEco C++” but using the NetLogo language. In both cases, the key scenario is called the Perpetual Motion Machine (PMM), and that scenario is described using the ODD protocol. This implementation is a test of the validity of the ODD description.