The model was used by 200 middle school and high school students in January, 2015, to learn and visually understand atomic radius. 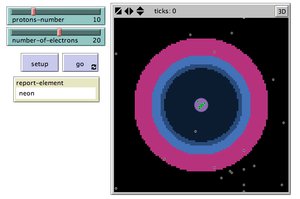