This is intended as a “Data Integration Model” (Edmonds 2010b). That is a consistent, detailed and dynamic description, in the form of an agent-based simulation, of the available evidence concerning the question of why people bother to vote. This integrates a variety of kinds and qualities of evidence. Thus it follows a “KIDS” rather than a “KISS” methodology - it aims to be more guided by the available evidence rather than simplicity (Edmonds & Moss 2005).

Thus this is a complex model, with many different social processes interweaving. Although not specifically designed as such, it turns out that the model has distinct “layers”. These are:
The input data which initialises the agents in new households (at the start or in-coming households)
The demographic processes: immigration, emmigration, partnering, birth, death, ageing etc.
The social network that develops and changes between agents (representing a relationship that would allow a political discussion if the agents were so minded)
The social influence via political discussions that can occur over the network
* The decisions and processes which determine whether agents vote or not

The purpose of this model is to enable the exploration of some social processes behind voter turnout, including demographic trends in household size and composition, social influence via the social networks the individuals are embedded within, wider social norms such as civic duty, personal habit and identity, as well as individual rationality. Thus this model is an explanatory model - it demonstrates the plausibility of (complicated) explanations of outcomes from the initial set-up.

It is important to understand that this is NOT a simulation with free-parameters that are conditioned on some “in-sample” data. It does have a lot of parameters, but these are set (or could be set) from empirical data. 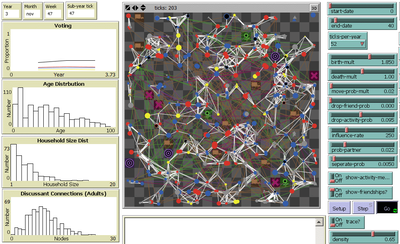 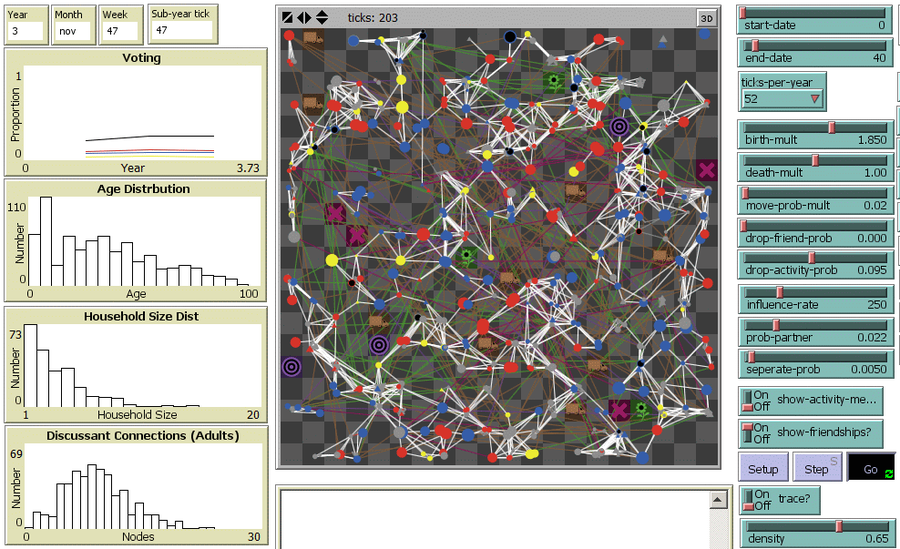