This release is out-of-date. The latest version is 2.0.0

Underwater visual census (UVC) methods are used worldwide to monitor shallow marine and freshwater habitats and support management and conservation decisions. However, several sources of bias still undermine the ability of these methods to accurately estimate abundances of some species.

FishCensus is an agent-based model that simulates underwater visual census of fish populations, a method used worldwide to survey shallow marine and freshwater habitats that involves a diver counting fish species to estimate their density. It can help estimate sampling bias, apply correction factors to field surveys and decide on the best method to survey a particular species, given its behavioural traits, detectability or speed.
A modified vector-based boids-like movement submodel is used for fish, and complex behaviours such as schooling or diver avoidance / attraction can be represented.

The FishCensus model comes with two separate programs. The Species Creator is used to create new fish species or observe/edit existing ones. Species parameters can be exported as a .csv file and imported into the main model where the simulation happens.

A virtual diver uses a survey method to estimate fish density. The true density of fish is known, which allows for the quantification of bias, a measure that is very difficult to determine in the field.

For more info and tutorials, visit the wiki on Bitbucket, or the model webpage.

If you use this model, please cite the original publication.

All four fish types used in the original publication are available in the species database. 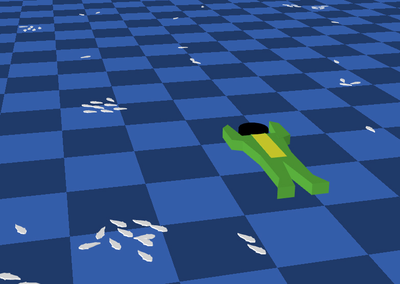 This version is the state of the model at the time of its first publication.