While studying entropy in closed capital exchange agent-based models such as EiLab, I have developed some formulae that I believe are generally applicable, with some care, in any ABM in which some characteristic quantity or quality is conserved. In this model I am experimenting with taking those formulae out of the model in which they were developed, and applying them in a less-well-studied circumstance. That is, as an experiment, I am applying them to conserved quantities in an open evolutionary system. In this model, energy is conserved - but also, genetic coding is conserved. But, they are conserved in two different ways, so it requires some experimentation to decide how to apply the formulae.

Entropy and Energy - Energy is conserved on a transaction-by-transaction basis. No energy can appear out of nowhere. It must be placed into the model by the Sun’s rays. And, no energy can just disappear. It must be gathered by the seekers, and degraded as they move about.

Entropy and Genes - DNA (genetic codes) are conserved in a different way. The genes are passed from mother to daughter once per generation. They are not 100% conserved. There is some small possibility that the daughter will have a random mutations of some gene. The DNA is merely “sufficiently well conserved” to form a stable base for persistence. 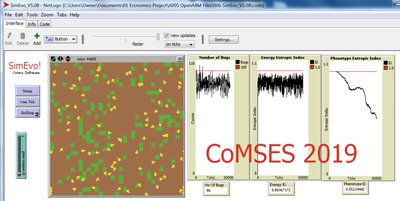 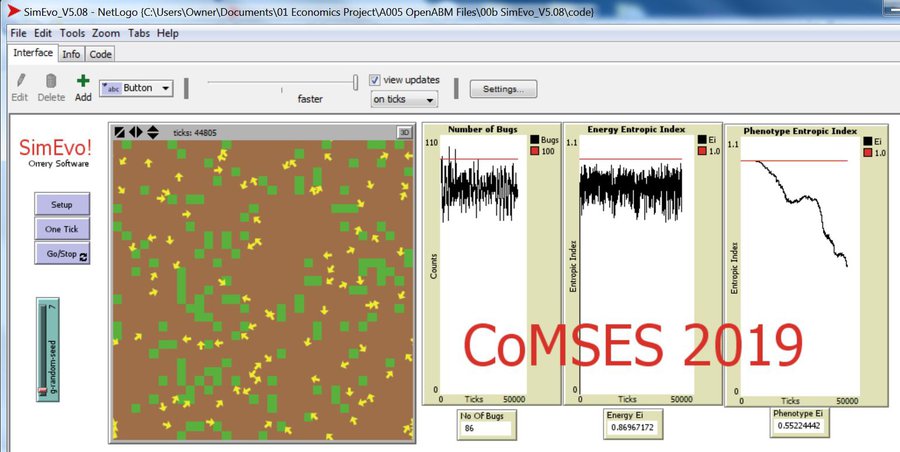 This model demonstrates techniques used to simulate evolution that were developed and first used by Dr Michael Palmiter in 1985. They are very effective, but not widely known. It is intended to be used as a teaching tool for students who plan to study the dynamics of evolving systems.

It also demonstrates techniques used to calculate changing entropy in an evolving system. The calculations are used for two different circumstances in which entropy is changing. The entropy of a changing distribution of energy is calculated and displayed, and the entropy of the changing phenotype of an evolving population is calculated and displayed. Again, it is intended to be used as a teaching demonstration for students who plan to study the role of entropy in models of sustainable economic systems.

The program is written in NetLogo 5.0.5, and requires that the interpreter be downloaded and installed from the servers at Northwestern University ( https://ccl.northwestern.edu/netlogo/5.0.5/ ).