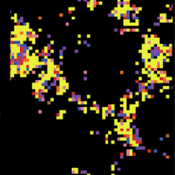 This is an urban dynamics ABM of abstraction of a city and residents’ activities there.

It allows you to evaluate the effects of urban policies, such as an introduction of an open facility for residents with pedestrian-friendly accommodations, promotion of bicycle use, and control of private automobile use in an urban central area, in controlling urban sprawl.