This agent-based simulation model for group interaction is rooted in social psychological theory. The
model integrates affect control theory with networked interaction structures and sequential behavior protocols as they are often encountered in task groups. By expressing status hierarchy through network structure we build a bridge between expectation states theory and affect control theory, and are able to reproduce central results from the expectation states research program in sociological social psychology. Furthermore, we demonstrate how the model can be applied to analyze specialized task groups or sub-cultural domains by combining it with empirical data sources. As an example, we simulate groups of open-source software developers and analyze how cultural expectations influence the occupancy of high status positions in these groups. 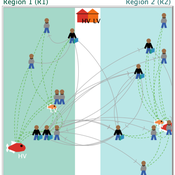 The purpose of this model is to understand the role of trade networks and their interaction with different fish resources, for fish provision. The model is developed based on a multi-methods approach, combining agent-based modeling, network analysis and qualitative data based on a small-scale fisheries study case. The model can be used to investigate both how trade network structures are embedded in a social-ecological context and the trade processes that occur within them, to analyze how they lead to emergent outcomes related to the resilience of fish provision. The model processes are informed by qualitative data analysis, and the social network analysis of an empirical fish trade network. The network analysis can be used to investigate diverse network structures to perform model experiments, and their influence on model outcomes.

The main outcomes we study are 1) the overexploitation of fish resources and 2) the availability and variability of fish provision to satisfy different market demands, and 3) individual traders’ fish supply at the micro-level. The model has two types of trader agents, seller and dealer. The model reveals that the characteristics of the trade networks, linked to different trader types (that have different roles in those networks), can affect the resilience of fish provision.