This is a model that simulates surveyors counting aninmals while deploying belt-transect, stationary-point-count and roving (random path) techniques. The model demonstrates how non-instantaneous sampling techniques produce bias by overestimating the number of counted animals, when they move relative to the surveyor.

The model can be used to demonstrate that bias increases as the speed of the animals relative to the observer increases.

Using the provided bias calculator, it is possible to use the output of the model to apply bias correction to field data.

The model assumes an area that is featureless and flat, with a default size of 200x200 cells each with an area of 1 square meter. The origin of the coordinate system is on the bottom left corner.

For each simulation, the surveyors start in the middle and face north. aninmals and transect surveyors move every second, but the time step for counting can be set to 2 seconds for shorter computing times (set by default on the original model, but note that some aninmals may be missed, particularly if they are very fast).

At each counting time step, surveyors count the number of aninmals they can see based on the direction the surveyor is facing, the visibility distance and angle. Viewing angles are fixed and cannot be changed on the interface. They are set to 160º for the stationary and roving surveyors and 180º for the transect surveyor. 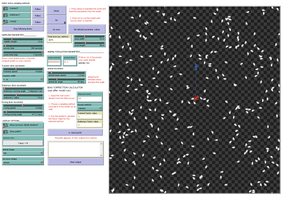 This model has not been reviewed by CoMSES Net and should be independently reviewed to meet the Open Code Badge guidelines.
You can use the following HTML or Markdown code to create an Open Code Badge that links to version 2.0.0 of this computational model.
Download Version 2.0.0
Authors