There are three types of agents in this simulation. The rules that each agent class follows are described below.

Gunman Indoor/Outdoor:
1.Are there bullets in the magazine? If not, reload for this turn and skip all remaining rules (reload takes assigned reload time)
2.Aim at closest civilian ± N(0,σ)
3.Fire X rounds
a.If less than X rounds left in the magazine, fire remaining rounds.
4.Move towards most recent agent fired at (move at assigned running speed)

Security Guard Indoor/Outdoor:
1.Are there bullets in magazine? If not, reload for this turn and skip all remaining rules (reload takes assigned reload time)
2.If there is a civilian within 1.5 feet of a straight line between agent and the gunman, move to step 5 for this turn (won’t shoot if a civilian is in the way)
3.Aim at closest gunman ± N(0,σ)
4.Fire X rounds at gunman
a.If less than X rounds left in the magazine, fire the remaining rounds.
5.Move toward the gunman at running speed
a. If gunman is within the distance, run this turn then tackle him 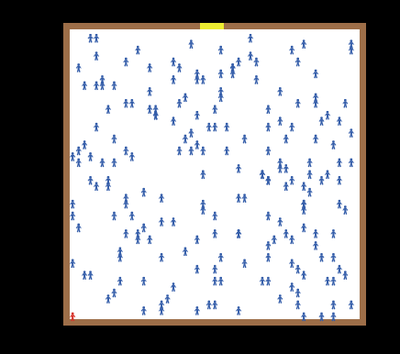