The role of spatial foresight in models of hominin dispersal (version 1.1.0)

Evaluates the natural selection of foresight, the accuracy at which agents assess their environment, under different degrees of environmental heterogeneity.

Agent’s aforesight trait controls the probability of either moving randomly to a 9-cell neighbour (“a mistake”), or choosing the best neighbouring cell. aforesight mutates on reproduction and agents on high valued cells reproduce more frequently allowing evolution to find an optimal foresight value.

HOW TO USE IT

Maps are not generated by NetLogo. Download the map set and unzip to the same folder as the .nlogo file.

Choose a heterogeneity from the “fmap” list running from 2.001 (least heterogeneous) to 2.999 (most heterogenous). Click rand to choose 1 of the 100 randomly generated surfaces. Optionally adjust base birth-rate, mutation-size, and initial foresight. “Setup” & run with the “Go” button.

See the BehaviourSpace dialog for the run sets used in the article.

Resource clusters get crowded with high foresight agents. As a result, high foresight is maladaptive due to reducing the available reproductive space. Mean foresight of the population falls to relatively low levels.

As heterogeneity is increased, the population disperses and favours higher foresight.

Importing other surfaces, or even a landscape you’re interested in classified by its presumed habitat quality.

Introduce population growth, increase the range of the evaluated neighbourhood, or work out a way to share information between agents. Does increased information about the environment increase success or foresight?

This model was designed for a paper to be published in the Journal of Human Evolution in 2014. 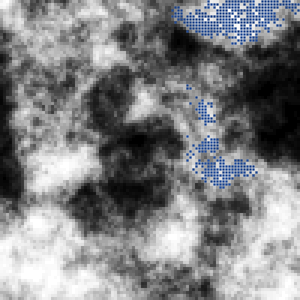 This model has not been reviewed by CoMSES Net and should be independently reviewed to meet the Open Code Badge guidelines.
You can use the following HTML or Markdown code to create an Open Code Badge that links to version 1.1.0 of this computational model.
Download Version 1.1.0
Authors