A modified model of breeding synchrony in colonial birds (version 1.1.0)

The original model was developed by Jovani and Grimm (2008) to examine the hypothesis that synchronized breeding between neighbours and across whole bird colonies is dependent in part on the reciprocal modulation of individual birds’ stress levels. The model represents 10,000 individual nesting birds on a regular 100 × 100 square lattice. Birds are assumed to lay eggs once their own stress level (OSL) drops below a given threshold (arbitrarily fixed at 10, 1/10 of the minimum initial OSL and 1/30 of the maximum). OSL is assumed to change through time following:

where: t is the current timestep, SD is the stress decay (from 1 to 100), meanNSL is the mean OSL of the eight contiguous neighbours, and NR is the relevance given to neighbouring birds’ stress levels (from 0 to 1). The full ODD (Overview, Design concepts and Details) model specification can be found in Jovani and Grimm (2008).

The original program was modified using NetLogo 5.0 by James D.A. Millington (‘JM’ in code comments) and is used in Millington et al. (2012).

The original version of the model was modified for three main reasons:
to allow data output for analysis (e.g., output_data switch, create_movie switch, data_PrintToFile procedure)
to allow representation of variable numbers of influencing neighbouring birds (countN slider)
to allow full replicable model runs by allowing the user to specify the random number seed (seed slider)
Millington et al. (2012) used this modified model version to show how a narrative approach to explanation can be useful for interpreting and understanding how and why generative simulation models produce the emergent patterns they do.

The modified program is free of use for research and education. If using this modified version of the model, please cite both Jovani and Grimm (2008) and Millington et al. (2012). 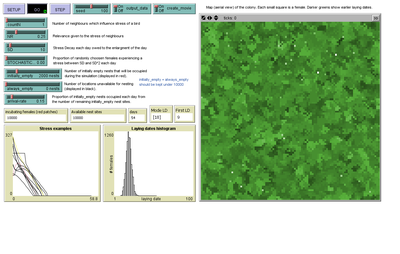 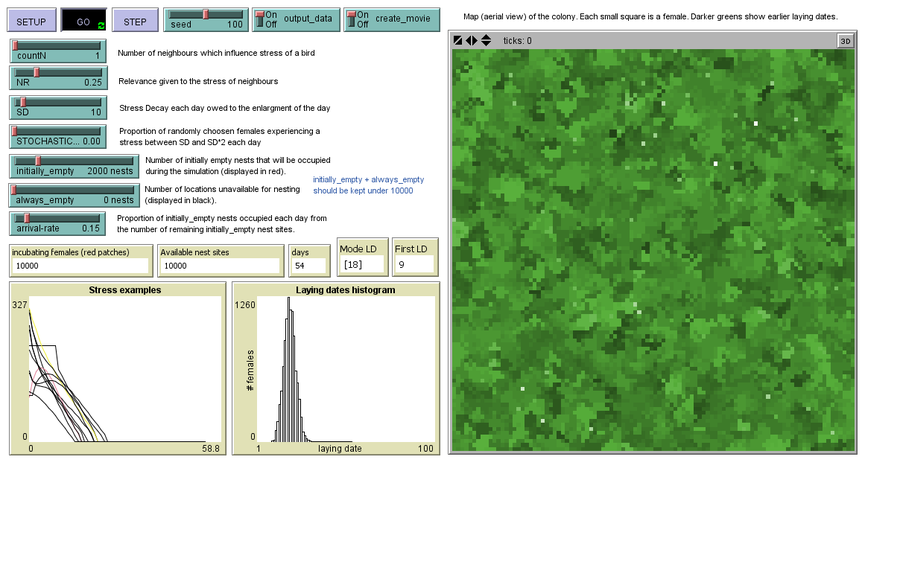