The model depicts technology adoption for the greenhouse sector in the Westland, based on the three principles of Universal Darwinism: variation, selection and inheritance. Greenhouse farmers buy technologies for their greenhouses to try to earn as much money as possible. The decision to buy a technology is based on different factors. In this project we will focus on personal experience and information supplied by peers. The model describes how greenhouse farmers gain information and make decisions about acquiring technologies. We are interested in whether the system approaches convergence on technologies that provide the most benefit and which factors are of influence on the final result and speed of this process.

The model will be specified both abstract and simple, making it suited to be made more real and/or to be used for other industries.

1.1 What is the problem of interest?

Once a technology has been invented (the innovation) it is not necessarily bought (the adoption) by every one that could make use of it. The effect of an innovation on society (e.g. sustainability) is however determined by the number of people that adopt the innovation. The process of adoption of an innovation within the group of potential adopters is called diffusion and this is the subject of this report. Many papers have been written about this revealing different views on important factors, models to use, governing process and overall system behaviour.

One of these views is that Universal Darwinism (UD) may be governing the process of technology diffusion. In biology, processes characterised by variation, selection and inheritance were recognised by Darwin to be a valid explanation for the diversity, adaptive complexity and distribution of species, and called this process descent with modification or natural selection. Case studies suggest that these characteristics are true of the greenhouse horticulture industry (and perhaps many others), which may be better explained with a UD-based diffusion model than they are under the current diffusion model.

So we have built a fairly abstract model of technology diffusion in the Westland greenhouse area that can be expanded and also be used for other sectors.

1.1.1 What is the observed macroscopic regularity that is of interest to us?

Diversity, adaptive complexity, and uneven distribution, like that of species, and an logistic function for the diffusion of more successful technologies compared to others.

Both technologies (e.g. different CHP systems) and greenhouses (size, crop) are heterogeneous, so a great number of possible combinations of technology in use by a greenhouse exist. Some technologies perform better than others, and the better technologies will likely be:

However, due to imperfect information and the fact that technologies cannot be replaced at any instance, not all farmers will use the technologies that are the best for them at all times, leading to the macroscopic regularities of interest.

Many actors may benefit from this (farmers, authorities, technology sellers, society). Also when this kind of models will (they probably will) be built in the future Science could be called the problem owner.

There is only one kind of agent, representing a greenhouse farmer/greenhouse business (social and technnical aspects) that:

The company specifications are:

Each crop designation has:

Agents are linked to neighbours according to preferential attachment. Agents use this network, and a user defined network degree setting (integer >= 1 and <= infinity) to determine each agent’s neighbours.

If money variable ever drops below 0, agents are reinitialized (current technologies are randomized, opinions are wiped, money is reset, and crop designation is randomized.)

First the initialization step is discussed and then the recurring time step.

4.1 The main modeling assumptions are:

No physical distance - The transfer of information is expected to take place regardless of the physical distance. Communication technology and the fact that the Westland is just a small area are enough reason for that. Furthermore, the real world physical processes of the movement of technology and products are not explicitly modelled because they aren’t expected important for the problem.

Agents do not die or change surface - In the real world a company that goes bankrupt will probably be disconnected from the social network there may not be even another greenhouse farmer on the same plot. However, since making adjustments in the network will have great influence on the working of the model (opinion updates make use of the neighbours), especially when an agent with many neighbours is taken out, we have chosen to keep the social network intact. When an agent goes bankrupt it will just get new company specifications and its libraries are reset. The surface will however remain the same because physically speaking this is correct.

Time step one year - Acquisition of technology, selling products and sharing information are all processes that mostly happen multiple (irregular) times per year. However for matters of simplification we have taken a time step of one year in which all of these processes occur once. At a scale greater than one time step, the lifespan of the technologies is different so that some (assumed natural) variation in moments of technology acquisition is generated. Also greenhouse keepers usually only change major technologies during the time the crops are replanted, which happens once a year during which there is no production.

Company surfaces are power law distributed - In the Westland there are a lot of ‘small’ greenhouses (around 1 hectare) and a few huge companies (around 25 hectare).

The model is setup in such a way that all information about the existing technologies, the product sales prices and the possible company specifications is ‘owned’ by the environment. Companies are randomly assigned technologies (including technology attributes) and company specifications on the basis of which they interact with other companies. In this way the environment holds all information about the world; giving a clear overview and ease of adjustment. 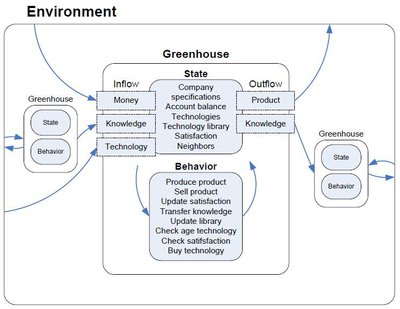 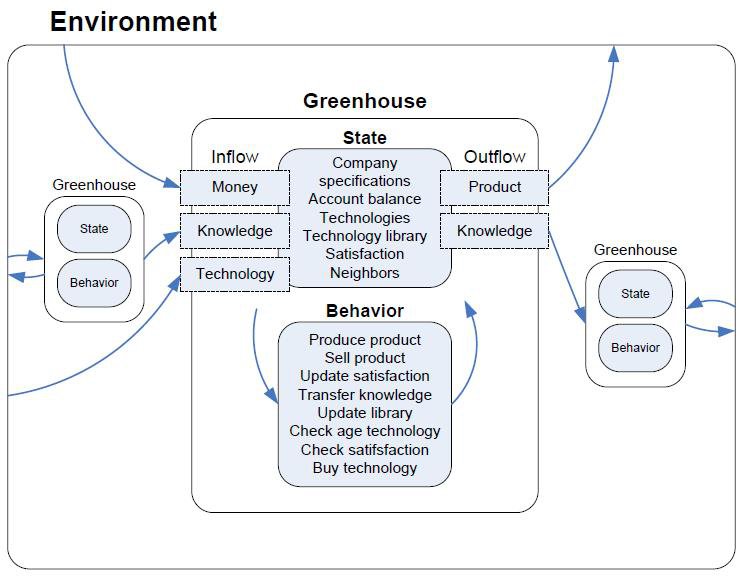