I studied Molecular Biology and Genetics at Istanbul Technical University. During my undergraduate studies I became interested in the field of Ecology and Evolution and did internships on animal behaviour in Switzerland and Ireland. I then went on to pursue a 2-year research Master’s in Evolutionary Biology (MEME) funded by the European Union. I worked on projects using computer simulations to investigate evolution of social complexity and human cooperation. I also did behavioural economics experiments on how children learn social norms by copying others. After my Master’s, I pursued my dream of doing fieldwork and investigating human societies. I did my PhD at UCL, researching cultural evolution and behavioural adaptations in Pygmy hunter-gatherers in the Congo. During my PhD, I was part of an inter-disciplinary Hunter-Gatherer Resilience team funded by the Leverhulme Trust. I obtained a postdoctoral research fellowship from British Academy after my PhD. I am currently working as a British Academy research fellow and lecturer in Evolutionary Anthropology and Evolutionary Medicine at UCL. 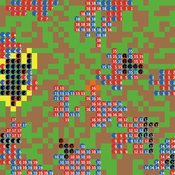 This is an agent based model on the life-cycles of small scale and large scale human social groups based on ecological dynamics.