OfficeMoves: Personalities and Performance in an Interdependent Environment (version 1.0.0)

The purpose of this model is to study the interaction of different agent strategies and their effects on the performance environment. By doing so, the model helps the user build theories about homophily, office place norms, and organizational patterns. 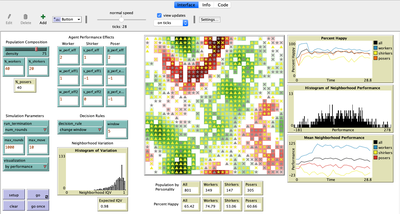 OfficeMoves: Personalities and Performance in an Interdependent Environment 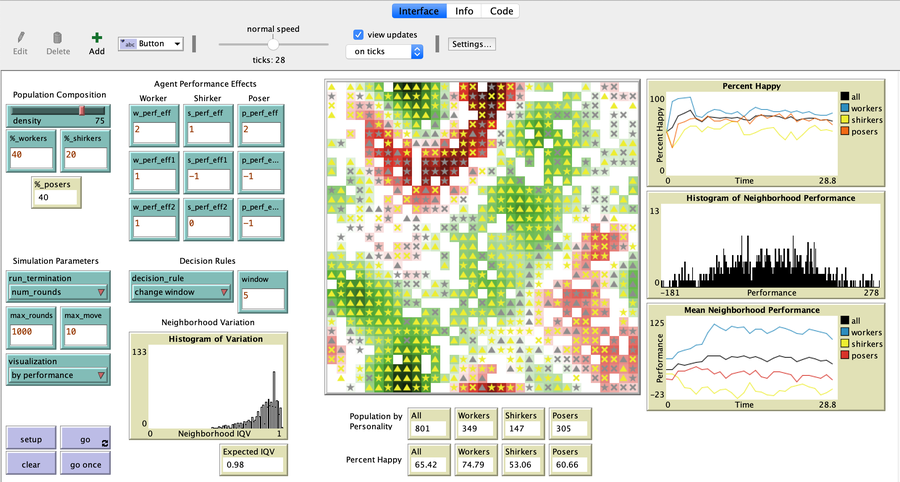 This model supports theory building concerning homophily and workplace norms. It accomplishes this through the interaction of three different personalities - defined by the performance effects and performance preferences - in a finite space and over time. The fundamental parameters for these thought experiments are the population density, the distribution of personalities, and the decision rules.

The population density and distribution of personalities should be straight forward. The decision rules require some explanation. There are four sets of decision rules. The primary set follows from the abstract personality descriptions above and it is the set intended for theory building. The set uses a moving average of the change in neighborhood performance or neighborhood performance. The length of the moving average’s window is set by the user. This allows the user to explore the differences between the effects of short-term change and long-term change. Using the moving average, agent happiness is determined as follows.

This model has been reviewed by CoMSES Net and meets the Open Code Badge guidelines.
You can use the following HTML or Markdown code to create an Open Code Badge that links to version 1.0.0 of this computational model.
Download Version 1.0.0
Contributors