This agent-based model was built as part of a replication effort of Jeness et al.’s work (linked below). The model simulates an MSM sexual activity network for the purpose of modeling the effects of respectively PrEP and ART on HIV prevention. The purpose of the model is to explore the differences between differerent interpretations of the NIH Indication Guidelines for PrEP. 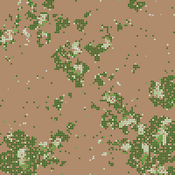 multilevel selection common pool resource sustainable use institutional evolution cultural group selection
This website uses cookies and Google Analytics to help us track user engagement and improve our site. If you'd like to know more information about what data we collect and why, please see our data privacy policy. If you continue to use this site, you consent to our use of cookies.
Accept