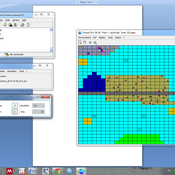 Individually parameterized mussels (Mytilus californianus) recruit, grow, move and die in a 3D environment while facing predation (in the form of seastar agents), heat and desiccation with increased tide height, and storms. Parameterized with data collected by Wootton, Paine, Kandur, Donahue, Robles and others. See my 2019 CoMSES video presentation to learn more. 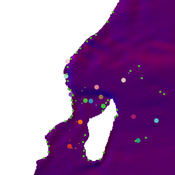