Model of communication between two groups of managers in the course of project implementation (version 1.0.0)

The managerial sense of the feedback is the stimulating effect of the positive value of the accumulated communication complexity (positive background of the project implementation) on the productivity of the performers. Provided there is favorable communication (“trust”, “mutual understanding”) between the customer and the contractor, it is more likely that project operations will be performed with less lag behind the plan or ahead of it.
The behavior of agents in the world of the model (change of coordinates, visualization of agents’ belonging to a specific communicative act at a given time, etc.) is not informative. Content data are obtained in the form of time series of accumulated communicative complexity, the deviation of the earned value from the planned value, average indicators characterizing communication - the total number of communicative acts and the average number of their participants, etc. These data are displayed on graphs during the simulation experiment.
The control elements of the model allow seven independent values to be varied, which, even with a minimum number of varied values (three: minimum, maximum, optimum), gives 3^7 = 2187 different variants of initial conditions. In this case, the statistical processing of the results requires repeated calculation of the model indicators for each grid node. Thus, the set of varied parameters and the range of their variation is determined by the logic of a particular study and represents a significant narrowing of the full set of initial conditions for which the model allows simulation experiments.
In particular, the developed model makes it possible to conduct a simulation experiment to determine the quantitative measure of the relationship between the value of FB (feedback) and the ratio of the general average values of the communication skills of the customer’s and the executor’s groups.
This is a very simple (less than 100 lines of code) model, which is educational in nature and is designed for various simulation experiments. Experiment patterns are stored in the behavior space of the model.
For convenience, a parser .XLS-file is included in the model documentation. By copying the data from the output file generated by NetLogo to the sheet of this file, you can get the results of the experiment in the cells of the worksheet in the form of numbers. 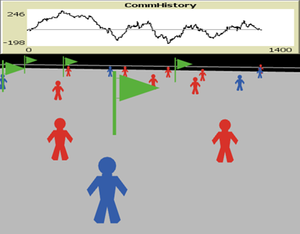 I.A. Smarzhevskiy, Structural model of interaction between two groups of managers in the course of project implementation // National interests: priorities and security. 2013. No. 5 (194). S. 9-15.
https://www.fin-izdat.ru/journal/national/detail.php?ID=55088