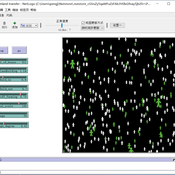 The purpose of this study is another agent-based replication of a System Dynamics model (Anderson,1973) where he analysed the dynamics of nutrient, biomass, oxygen and detritus in a model lake under conditions of artiﬁcial fertilising and policies to deal with the consequences of artiﬁcial fertilising.. A ﬁrst replication (Möhring & Troitzsch,2001) added those agents to the original model that were necessary to move the role of the experimenter into the model, whereas this replication replaces the original lake with a collection of small elements between which biomass, nurtrents and oxygen are exchanged, adds rivers upstream and downstream as well as adjacent land divided into villages and populated with farms and industrial plants run by individual persons.