The release you are viewing is currently unpublished.

This model is implemented to study phase transition in the social impact model of opinion formation. A random parameter is considered as the system noise, indicating the individual’s inexplicable opinion changes. This noise could be an indicator of any other influential factors, such as public media, affects, and emotions.
Scale-free random networks have been used as interaction network topology. Two scenarios have been implemented: the original social impact model and a similar model using the concept of social power based on the agents’ node degrees in the interaction network as an estimation for their persuasiveness and supportiveness strengths.
The simulation results show how opinion phases, including majority and non-majority, are formed in terms of the initial population of agents in opinion groups and noise levels. Two factors affect the system phase in equilibrium when the noise level increases: breaking up more segregated groups and dominance of stochastic behavior of the agents on their deterministic behavior. In the high enough noise levels, the system reaches a non-majority phase in equilibrium, regardless of the initial combination of opinion groups. In relatively low noise levels, the original model and the model whose agents’ strengths are proportional to their centrality have different behaviors. The presence of a few high-connected influential leaders in the latter model consequences a different behavior in reaching equilibrium phase and different thresholds of noise levels for phase transitions. 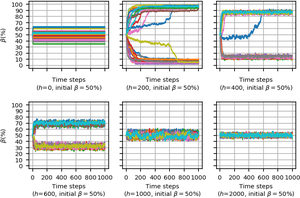 The model with enough details and pseudocode is described in the manuscript currently under review by JASSS.

Giude to run the model:
The model is coded in Python, using ‘mesa’ pachage.

The main.py file contains parameters to be set. The default values are those used in the manuscript under review. After running the model, output files are generated, which are input files for generate_diagrams to generate diagrams. The folder ‘Last_Run’ is defined to contain the input files and output diagrams of generate_dagram main file.

The model results and related diagrams are also uploaded.

Hold on! This model is currently unpublished and cannot be cited until it has been published.

Contributors are hidden for unpublished releases

Discourse comments are disabled. (this page is private)
This website uses cookies and Google Analytics to help us track user engagement and improve our site. If you'd like to know more information about what data we collect and why, please see our data privacy policy. If you continue to use this site, you consent to our use of cookies.
Accept